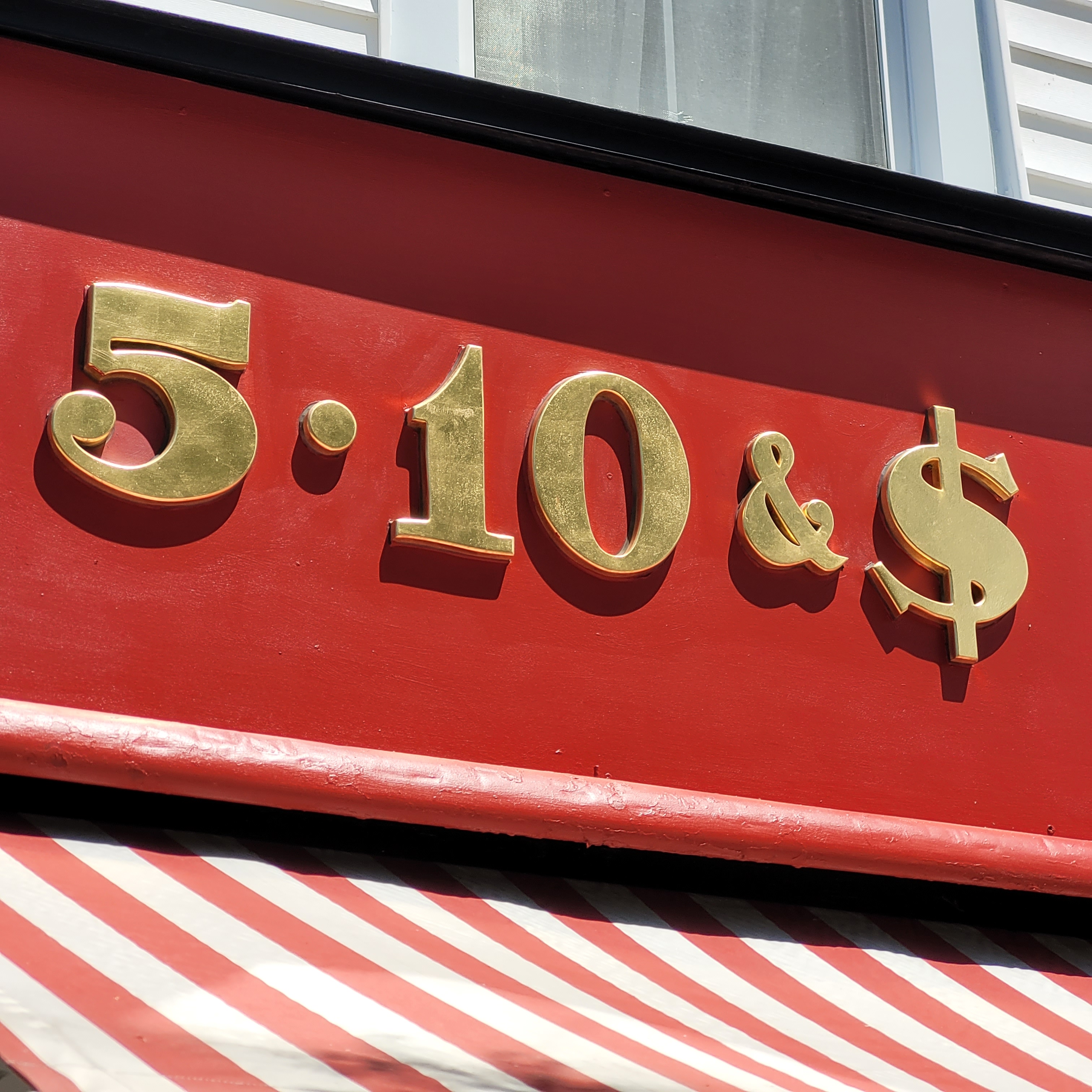 We recently repainted our storefront and had the awnings replaced. You might say, “OK, routine maintenance, what’s the big deal?”

Well for us, it is! Over the years, our red-and-white striped awnings and gold-leaf, hand-lettered sign have effectively become our trademark, landmark, and benchmark! We’ve told customers to “look for the red-and-white awnings.” Other people also reference our store this way. The awnings and their stripes span about 120 feet of our frontage on Main Street, so we want to make sure they’re always in good shape and fresh-looking. It’s one way we welcome our customers, from those visiting us for the first time to those whose families have been coming to see us for generations.

How did they come about, these stripes? Well, like many things in five-and-dime history, they were inspired by Frank Woolworth, the originator and creator of the entire five-and-dime business model. Born and raised near Watertown, New York, Woolworth was working at a retail store that, in keeping with industry protocol at that time, kept almost all merchandise under glass or behind a counter, requiring the customer to ask a clerk to see items of interest. Also, prices were rarely set; every transaction was a bartering negotiation between the clerk and customer.

Upon being asked by his boss to dispose of some old inventory, Woolworth came up with an idea: He displayed the merchandise on tables and priced each item at either five or 10 cents, and to draw attention to these displays, he draped the tables with red-and-white-striped fabric. Customers could see the price of everything and pick up and examine the merchandise.

It was a big hit, and Woolworth decided to go out on his own – selling a wide variety of inexpensive household goods at fixed prices of a nickel or dime. After a few false starts, he opened his first successful Woolworth’s 5 & 10 Cent Store, in Lancaster, Pennsylvania, in June 1879. His ‘five and ten’ prototype quickly became a massive success, and that first store gave rise to other stores, all under the name Woolworth Bros. Later, the name changed to F.W. Woolworth Company, and eventually the company and its stores became known worldwide simply as "Woolworth's."

Woolworth’s business model was copied very quickly as other five-and-dime stores sprang up in almost every large city and small town in America. By the early 1910’s, other major national chains competed with Woolworth’s, including Kresge’s, Ben Franklin, McCrory’s, Murphy Bros., and Newbury’s. There were also hundreds of small, independent, family-owned five-and- dimes—one of which was Vidler’s. And almost every one of them, including Vidler’s, followed the Woolworth’s color scheme of red-and-white awnings that made the buildings stand out on local streets.

Woolworth can’t take complete credit for the gold leaf lettering, but his chain of stores certainly popularized the look. The act of gilding signs with gold-leaf started in the 1870’s, and many shops of all sizes started using gold-leaf to strengthen the looks of their signs and evoke an image of quality and permanence. Because of Woolworth, gold-leaf lettering became pretty much standard for five-and-dimes – national chains as well as local independents. And it’s a pretty interesting artistic process, in that very fine, small sheets of gold leaf are brushed onto the letters. Believe it or not, genuine gold-leaf is much better than gold paint in both appearance and durability. Since gold is immune to most chemicals and weather conditions, it will last a very long time. Plus, it looks really nice, especially with the sun shining on it!

So, we’ll continue to honor the tradition of our five-and-dime forefathers, and we hope that you “look for the red-and-white awnings” and come in and see us when you visit East Aurora!