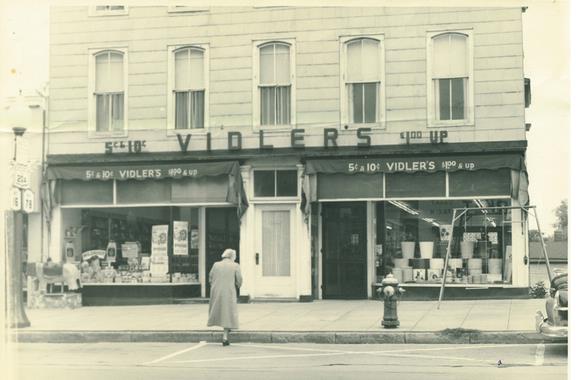 As of June of 2020, Vidler’s reached our 90th anniversary of serving East Aurora, NY.

Now, going on our 91st year, we believe that it’s about time to pay homage to not just our incredible run as the world’s largest 5 & 10 variety store for over 90 years, but also the legacy of the 5 & 10 store in general!

See, Vidler’s is a vital piece of 5 & 10 history. But we’re not the only one that still exists.

We weren’t the first, either!

Let’s rewind time a bit, and revisit the origins, history, and legacy of the 5 & 10.

Back In The Dark Ages, Before The Advent of Electricity…

Ok, maybe not that far back.

(Yeah, this seems like a better place to start.)

Up until the late 1800s, retail stores in the United States mostly consisted of large (and expensive) department stores situated in major cities, and specialty shops that sold very specific, particular items.

And when it came to smaller towns, you’d tend to find ‘country stores’ or ‘general stores’ that sold a little bit of everything.

In most of these stores, the wares would be kept under glass or behind the counter. If a customer wanted something, the clerk would take it out to show it to them. Prices weren’t labeled in these types of stores back in those days.

Rather, every purchase was a barter transaction, a trade negotiation between the clerk and the customer.

Then, along came a man named Frank Woolworth.

Frank Woolworth, The Father of the 5 & 10 Store

Frank Woolworth was born near Watertown, NY. In the 1870s, he was working for a small department store, when his boss (the owner) asked him to dispose of some old inventory.

Frank came up with an idea. He decided to display all of this old inventory on tables, with each item priced at either 5 or 10 cents.

Nowadays, that may seem like a ridiculously low price. But back then, keep in mind that the average weekly salary for a worker was about $8, with the average work-week length at 60 hours!

Needless to say, Frank’s idea was a huge hit.

They quickly sold out of the overstock, which gave Frank Woolworth an idea.

He decided to open his own store, selling a range of useful, yet inexpensive household goods all at the fixed prices of either 5 or 10 cents.

A few false starts eventually led to the successful opening of Woolworth’s 5 & 10 Cent Store, in Lancaster, PA, in June of 1878.

His store became a massive hit, and it didn't take long for the 5 & 10 model to get picked up by stores in nearly every city and small town across the country.

Due to rising inflation, the changing times, competition, and the evolution of the general overall business landscape, all of the major retail chain 5 & 10 stores have closed. Woolworth’s, which eventually went on to become a major chain of stores, closed for good in 1997.

Vidler’s isn’t even necessarily a true ‘5 & 10’ story anymore, since we don’t sell all of our products for 5 or 10 cents (though we do still have a few items in that price point. Check out our candy counter!)

Nickel and dime price tags or not, it’s the legacy of the 5 & 10 that we strive to preserve.

The magic of the iconic wooden floors, the counters, the stairs, the floor plan, the popcorn machine, the candy counter… It all brings to mind a sense of vintage nostalgia that serves to keep this eclectic piece of American history alive, even in our modern times.

Yes, Vidler’s may be the largest. But you’d be surprised to learn how many truly historic, family-owned 5 &10 stores are still open for business today. (Stay tuned! In our next post, we’ll highlight a few for you!)

There aren’t as many as there used to be. Many have closed over the years. But the stores that remain open still serve to preserve a vital piece of not just our history and heritage, but also a way of life for people from all walks of life.

The 5 & 10 concept truly shaped the modern retail landscape. And here at Vidler’s, we take pride in that.

Vidler’s Has Gone Through A Lot To Survive

We opened at the dawn of the Great Depression, lived through the Second World War, incorporated in 1949, and added-onto the building in 1954.

And guess what? We didn’t even start promoting our store or advertising in local papers until 1960! (Up until that point, I guess people just wandered in off the street. Imagine that!)

But his sons, Robert Jr. and Edward continued on – promoting and marketing the old fashion 5 & 10, embracing TV advertising and gradually expanding further.

In 1999, Vidler’s final addition took place, and the store now consists of 4 connected buildings on 2 levels and almost 20,000 square feet.

And the third generation is now in place; cousin Cliff DeFlyer, Ed’s daughter Beverly and son Don joined the business respectively in 1985, 1990 and 2009. Cliff and Don manage the store on a daily basis (Bev having retired in 2019), but have a ways to go to match Bob and Ed’s combined 115 years at the store!

And then, when Covid hit in 2020, the store was forced to close for over 2 months, postponing

Which Brings Us To Today - And Tomorrow - At Vidler’s!

But now, we’re back. And our joyous 90th+1 anniversary celebration is going to go down in history books as being one of the greatest celebrations in Vidler’s history.

At the end of the day, it’s important to understand that all of this is a part of not just our history, but also 5 & 10 history. We’re here for a reason—to preserve what we see as being an incredible chapter in the history of American life, culture, and business. And to offer our neighbors what they need (and let’s be honest, what they want) at a price you can afford!

Stop in to Vidler’s today to get lost in the aisles and collect what catches your eye, browse our departments online, or call us before you come by to make sure we have that specific something in stock. See you soon!