Award-winning Karma! This thrilling game really gets the competitive juices flowing. In the game of Karma, you never really know who is going to win until the very last card. Social and competitive players alike will enjoy the clever nuances this game has to offer. The 4 different KARMA CARDS, like wild cards, make this game one with an ending that is a challenge to predict. Combine two games and you have a party game for up to 12 people! How to play The goal is to get rid of all your cards. KARMA is an elimination game where everyone wins – except for the last player holding cards. Each turn play a card of equal or higher number to avoid picking up the entire discard pile. Move through your cards faster by playing doubles & triples. There are four different KARMA CARDS in the deck and they can be played on any card. Be sure to use them wisely because in this game…What Goes Around...Comes Around! ages 8+

Get Directions To The Store
Back To
Games
Price:
Call in to find out, you’ll get a real live person on the phone!
Part #:
09000 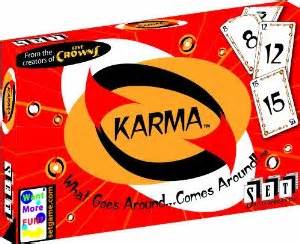 Scroll while hovering image to zoom