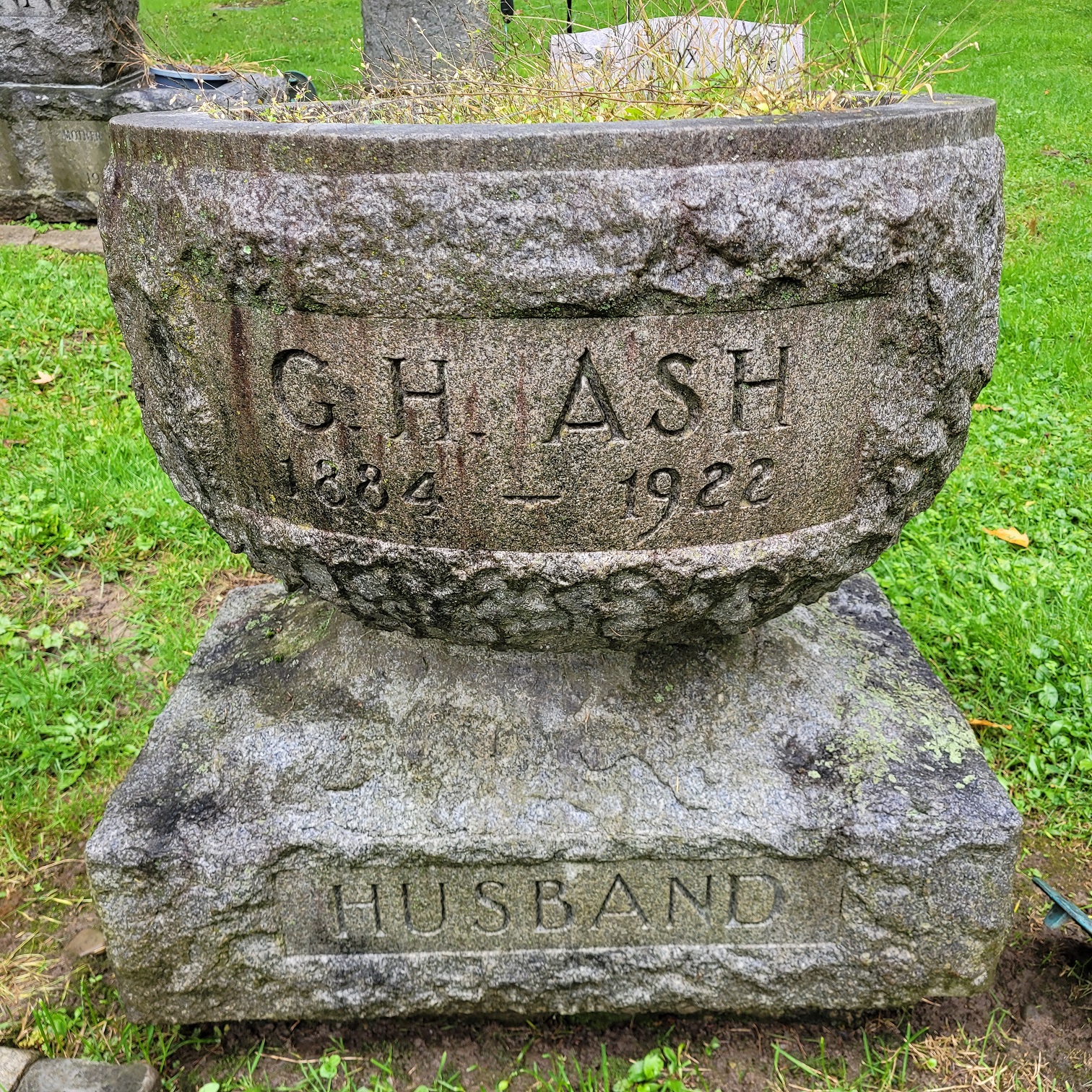 You hear all kinds of stories about old buildings. Usually, they’re about who built them or lived or died in them. Sometimes there’s a mystery.

So it is with Vidler’s and the ghost of George H. Ash.

Ash’s simple gravestone in East Aurora’s historic Oakwood Cemetery -- a weathered and weed-filled stone bowl bearing only the name “G.H. Ash,” the dates of his birth and death, and the single word “HUSBAND” – belies the human drama of the quiet tragedy that landed him there in August 1922.

It also belies the eerie mystery of Ash’s supposed exploits since being laid to rest, which are said to include the haunting of Vidler’s 5 & 10.

In the final days of his life, during the first week of August 1922, Ash – a 37-year-old, married electrician living in East Aurora – was busy doing electrical work in a third-floor attic on Main Street in East Aurora. As the story goes, Ash was installing the first electrical system in what would become the original, main Vidler’s building – the one the family would take over and open as a five-and-dime, with wood floors and counters, in 1930.

Constructed about 1870 on the site of a lumber mill that had burned down, the building had a fieldstone foundation, hand-hewn beams, and lots of wood. In the early 1900s, fire struck again, severely damaging the third-floor attic and roof, but the building survived and eventually water and gas were installed. Then electric service became available and, the story goes, a local World War I veteran named George Ash was chosen to wire the building and replace the gas lights.

Some years later, an older East Aurora resident mentioned to the Vidler’s that there had been a terrible accident and fatality when the first electricity was being installed; a man had been electrocuted. This was the first time the Vidler’s had heard of this. They wondered: Was it true or just a small-town tale?

In the early 1960s, during a plumbing and ventilation upgrade that included work on the third floor, a local contractor ventured behind a long-forgotten and charred panel, crawled into the sealed attic space, and came out holding an old, dried, leather electrician’s belt complete with screw drivers and pliers. That got the Vidler’s thinking about the story of the tragically killed electrician. Could it have been his belt?

Not long after that, tales began to circulate in town of strange activity at night on Vidler’s third floor – rumors of unusual flickering or dimming of lights on quiet, summer nights. These reports increased from mid- to late October. Even in recent years, residents of nearby apartments swear that they’ve seen a ghostly apparition appearing in the windows late at night. Some say it’s just an illusion created by headlights and streetlights reflecting off Vidler’s third-story windows. A few speculate that the electrician’s ghost is searching for his belt.

The Vidler’s took it all in stride as an interesting small-town ghost story, no doubt much embellished and exaggerated over the years by Ed Vidler, who was well-known for his storytelling. But then, much to their surprise, they received an email, in 2011, from a woman in Springville whose family originally was from East Aurora. “She wondered if we’d ever heard of her uncle, George Ash, who was tragically killed while doing some electrical wiring in our building,” Don Vidler recalls.

If that were all there was to this ghost story, it would be enough. The sad saga of George Ash has everything: tragedy, irony, bad timing, worse luck, mystery and the vagaries of time, and the discovery of a telltale toolbelt in a sealed-off attic. That right there is Poe-caliber storytelling.

But there’s more – more mystery and one more tragic twist.

The August 8, 1922, front-page Buffalo Times headline about Ash’s death – “E. Aurora Man Electrocuted” – says he was killed while wiring his own house.

According to the article, the accident happened after Ash’s wife, her hair sopping wet, complained that Ash’s turning off the electricity so as not to electrocute himself had derailed her plans to use a hair dryer. A few minutes after Ash turned the electricity back on, his wife heard a scream and a thud.

So who is that flickering the lights in Vidler’s attic? The address the article gives for Ash’s home, the supposed scene of the accident, isn’t that of the venerable dime store.

In fact, it doesn't seem to exist at all.