Monopoly: Choose Your Version At Vidler’s 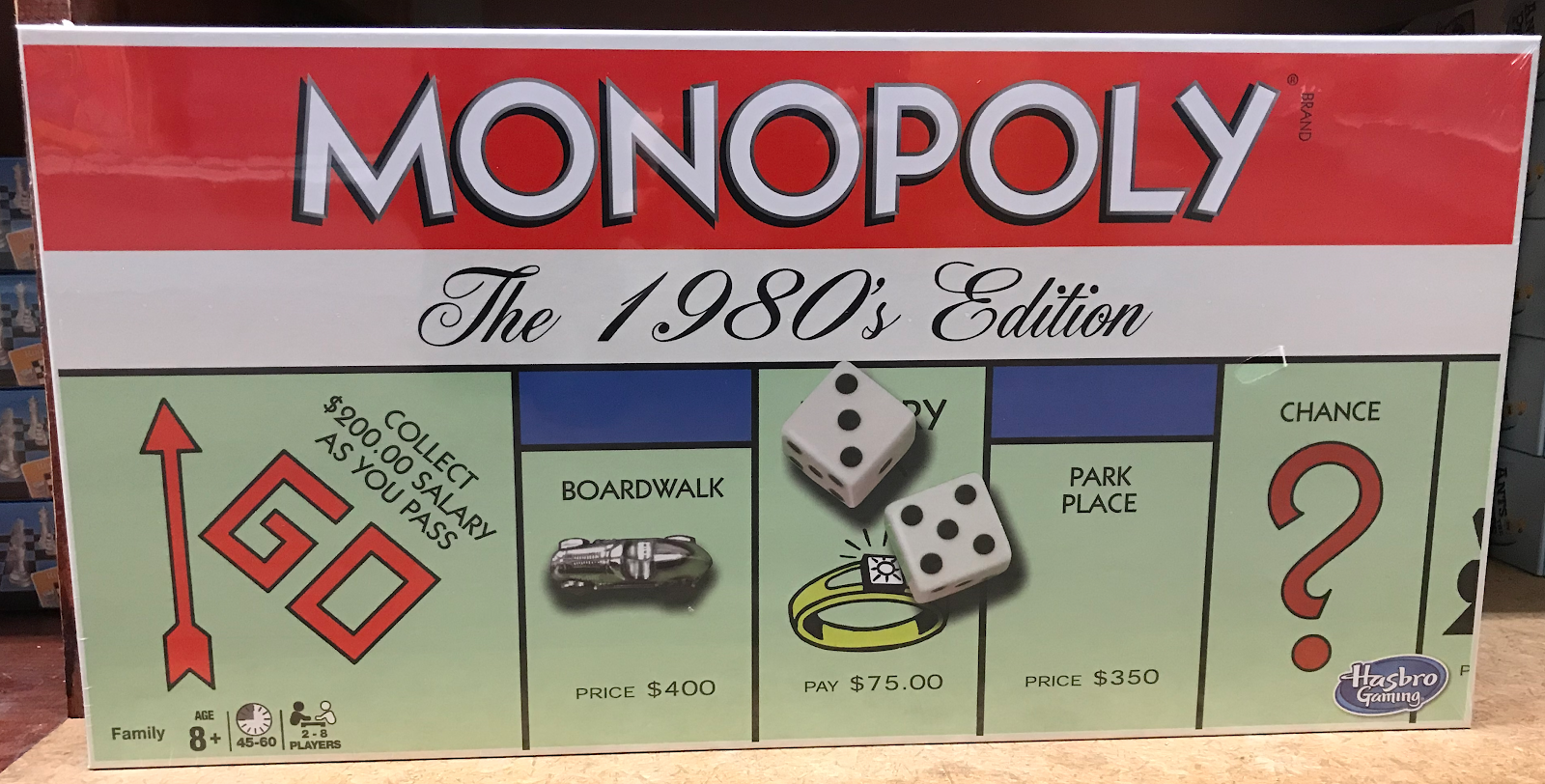 Monopoly is one of those games that you either grew up hating or loving. Its competitive nature, based on the idea of becoming the sole owner of the properties on the game board and bankrupting all opponents, has certainly caused many a family feud.

Memories of the banker always seeming to have enough money to get out of trouble, landing on Boardwalk with a hotel, going bankrupt, and being eliminated from the game are likely shared by many who have played this famous game. Combining strategy, cunning trading and a lucky roll of the dice, only one person can win this game and the title of Mr. Monopoly!

This game has roots that date back to 1903, originally created as a teaching tool for Henry George’s single tax theory that could ideally prevent monopolies from forming and fund the government through taxing landowners instead of income and sales.

But when Parker Brothers purchased the game from its creator in 1935 (Lizzie Magie, for a whopping $500,) they nixed the alternate tax concept and Monopoly became the competitive, capitalism-minded game that it is today. By publishing the game widely, they helped popularize board games - so we can thank this game for a lot of the fun we are able to have with our family and friends today!

How Many Versions Of Monopoly Are There?

The truth is, nobody knows for sure. Hasbro absorbed Parker Brothers in 1991 and they began re-envisioning the possibilities for the game - and new versions began to be licensed. Would you believe that there are so many different versions of the game that multiple websites exist with different counts from all over the world?

Some report that there are 1,144 versions published around the world, but one account says there are 2,586 different versions in a world record holder’s personal collection! Also, since you can make-your-own-opoly, there are essentially an infinite number of possibilities for the game.

There are all kinds of different versions of the game - most are novel and based on movies, popular artists and cartoons, while some versions are more deluxe, have electronic implements or are made of special materials like wood or glass.  However, there are some rare collector’s editions out there, too. There was even a $2 million version created with 18 carat gold, rubies, sapphires and diamonds - and the dice alone are worth $10,000!

How Many Versions Of Monopoly Does Vidler’s Have?

We lost count… Is “a lot” an acceptable response? While we don’t keep the gold version in stock (sorry!), we do have a number of varieties of this classic, historical game available. From dog-themed versions to cartoons and movies, a kid’s version and a couple more traditional, old-school varieties, there’s definitely a Monopoly game for everyone on your list.

Here’s are some of the types of the Monopoly games you can find on our shelves:

In Bob Ross Monopoly, “There are no mistakes, just happy little bankruptcies.” Well, accidents - but let’s be real.  Someone will end up bankrupt by the end of this colorful game based on the Joy of Painting® series.

If you’re more of a retro gamer, the Pac Man Monopoly game is reminiscent of an 80’s arcade game complete with a unique electronic banking and arcade unit.  This game also comes with a twist - a ghost that follows you around the board.  Don’t get caught or it’s game over!

Are you a wine person or a beer person? Either way, CHEERS to you and bottom’s up!  We have a Wine-opoly game that pairs fantastically with a classy charcuterie board and offers wine trivia on each card - so you can learn and get cultured as you play.

The Beer-opoly version pairs better with a bucket of wings and a pitcher of your favorite ale (you’re in luck hipsters - there are some IPA’s on the board). Careful, though, you might have to put on beer goggles and kiss your neighbor!
Please drink and monopolize responsibly.

Are you more “cartoons & cereal” or “Netflix & chill”? You can choose from Rugrats, Scooby-Doo and Dragon Ball-Z for you cartoon-heads - complete with collector’s tokens, themed cards, and other special show-related elements.

Pirates of the Caribbean, The Goonies, and Game of Thrones are just a sample of the evening-style entertainment-themed Monopol-options. (See what I did there??)

For you dog lovers out there, celebrate your love for your furry four-legged companion by playing them in a dog-opoly game!  There are a lot of different breeds available like Shih Tzu, Lab, and Pug, but if we don’t have your breed in stock, you can always make-your-own-opoly. It’s more fun than a calendar, and it’ll probably hold up better than that portrait tattoo you’re thinking about getting (or already have?)

There are many collector’s editions to choose from that are fun to play or show off.  Whether you pick up the Disney Animations version celebrating 80 years of Disney magic, or the classic 1980’s version with original Parker Brother’s design elements - you can put one on the shelf between your mint condition 1960’s prototype GI Joe and the tie-dye Beanie Babies with laminate tags. (For the Beanie Baby doubters out there, check this out.)

Just leave them on the shelf for a little longer and one day - cha-ching!
‍

At Vidler’s, we’re not saying we have a monopoly on the Western New York Monopoly market... but we do have a lot of them! Call ahead to see if we have the one you want in stock or stop in and check out all the varieties we have in person. If Monopoly isn’t your game, you can certainly get lost in the wonderland of our 5 & 10 store with over 75,000 items and games - where there’s definitely something for everyone.